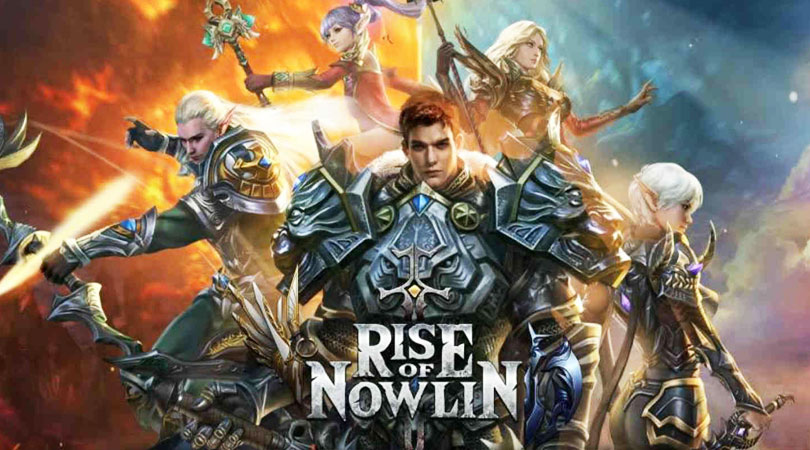 Have you tried Rise of Nowlin? It's not MOBA like Mobile Legends and surely not even similar to Point Blank as an FPS game! This is a special game for MMORPG fans who miss the fun of doing dungeons and PKs with some guildmates hehe ...

Just like any MMORPGs but this time on the mobile platform, you will be faced with character classes or whatever they are called (hero, job, etc.) for you to choose. Find the character class that best suits your playing style!

Are you a player who likes to appear in front as a battering force in the enemy line? If so, the WARRIORS class is your best choice! But, if your playing style is to attack from the backline so you could pick either ARCHERS or MAGES. Both classes have a large damage output and safely shoot from the back of the troops, but they are also considered weaker heroes in terms of defense and vulnerable to direct physical attacks. 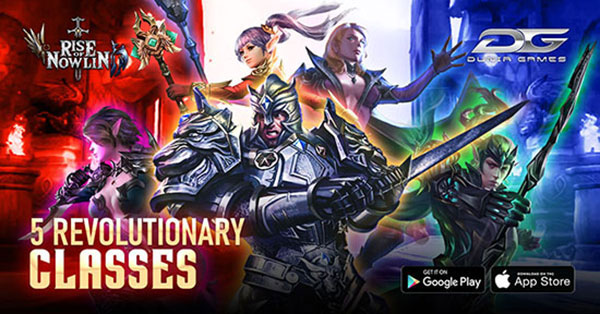 Want to be a killer hero with high aggressiveness? Better make ASSASSINS because the skills are very fast and have a big burst to slash the enemy in a flash, especially with the unique ability to disappear. One more hero is PRIESTS, which incidentally is a support class but in Rise of Nowlin, it is quite capable of dealing with significant damage as well as tough because of its healing power.

Well, let us take a look in more detail at the specific skills of each character class and how to build them in terms of game stats ideally!

"The SINS of those who fight valiantly against the dead will be forgiven, and the glory will live forever in heaven!"

One of the melee type classes in Rise of Nowlin who are equipped with a large HP and big defense stat to withstand various types of attacks, both physical and magic. Because there is no other class as thick as Warrior, whoever picks this class would automatically be designated as a TANK, despite the fact that it can also create huge damage as a DPS class. 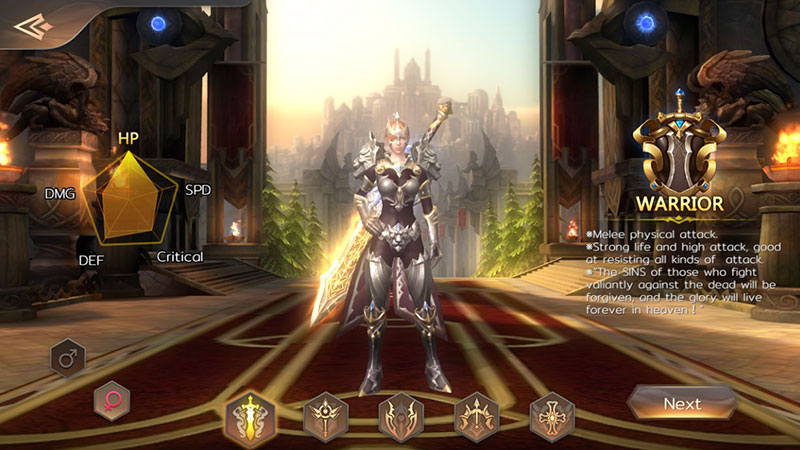 Warrior has one specific weakness regarding their basic attack speed which is the slowest compared to other classes. And, their skills do not generate many critical points, so the damage output is not a reliable one.

- Crushing Blow: Physical blow (level) which is aimed at one enemy in front of him. CD duration is 6 seconds.

- Anger Strike: The attack (level) strikes the enemy from above and functions as a Taunt. CD duration is 12 seconds.

- Judge: Warrior rotates his sword to deal damage (level) to enemies in the skill radius area and increases movement speed by 30%. CD duration is 18 seconds.

- Rage: Jump to a specific area to attack and stun enemies within a 4-meter radius. CD duration is 20 seconds.

- Fearless: Increase defense and amount of damage (level), while increasing the threat towards nearby enemies. CD duration is 25 seconds.

* The ideal combo skill of Warrior is to jump at the enemy to give threats early and allow teammates to look for positions. Continue with Skill 1 and 2 because they have the fastest duration, then proceed with the Taunt area to keep and gather enemies in one spot. Use skill Judge to be more optimized while the enemy is still gathering. Reuse skill 1 after reset, and Anger Strike only to pull back the enemies that are losing threats. (Rage > Fearless > Crushing Blow > Anger Strike > Judge > repeat skills)

The favorite class in Rise of Nowlin because they have enormous damage and a long-distance strike with the fastest attack power among other classes. Their endurance is also not far behind the Warrior or Priest, plus the ability to CC enemies. That's the reason why many players in Rise of Nowlin still choose to be an Archers. 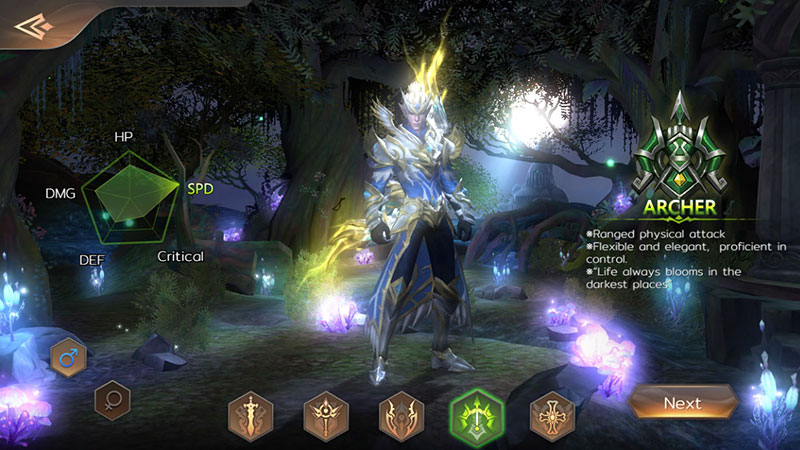 Unfortunately, one of the deadliest skills of this class, Arrow Rain only attacks in one direction, so it's quite easy to be avoided by enemies.

- Triple Shot: Three sequences of attack (level) to hit one enemy in a 14-meter radius. CD duration is 6 seconds.

- Arrow Rain: A wave of arrow attacks (level) that leads to all enemies in front of him. CD duration is 16 seconds.

- Reinforced Arrow: Arrow attack with a 30% Slow effect for 3 seconds to the affected enemy. CD duration is 10 seconds.

- Ghost Steps: Increase the movement of heroes and dodge (level) for 10 seconds. CD duration is 10 seconds.

* Take the initiative with skill 1 followed by skill 3 to slow down, plus Ghost Steps to increase your attack and avoidance. Then spam skill 1, which is the fastest skill cooldown. Prepare the Phantom Chain to lock the loose enemy and combined with the Arrow Rain skill. (Triple Shot > Reinforced Arrow > Ghost Steps > Phantom Chain > Arrow Rain > repeat skills)

"Born in the shadow, walking in the night, I am not the beginning nor the end!"

Being an iconic killer hero in various MMORPGs, the Assassin players in Rise of Nowlin are gifted with the unique ability to disappear and suddenly attack the enemy, then disappear again while looking for the next target. The attack power is very dependent on the critical damage in each skill to have an optimal impact on the enemy in a short time. 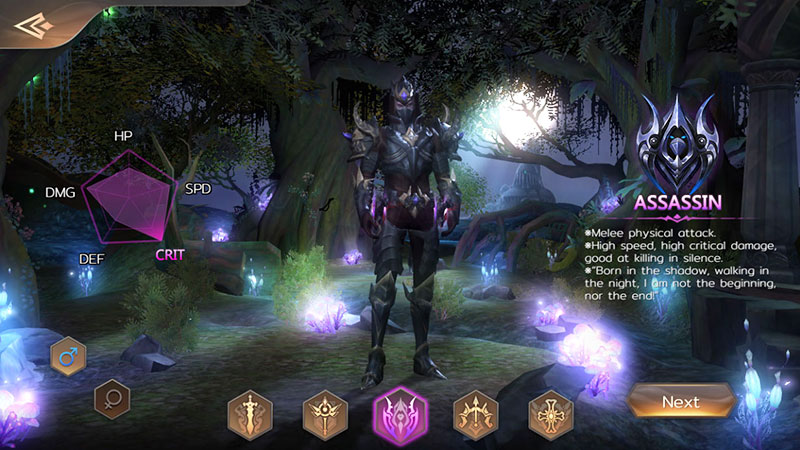 Assassins are not the type of hero who will fight openly, so every time he is going to expose himself, he had to commit to the kills because he is practically vulnerable to enemy attacks. So, it is recommended for this class, once you appear just keep targeting as many enemies as possible and run away as fast as you can, or merely accept the fate of being crushed to pieces.

- Shadow Rush: Crashes towards the enemy with a deadly stab. CD duration is 6 seconds.

- Fatal Raid: A deadly attack (level) towards the enemy and has a chance to stun for 2 seconds. CD duration is 12 seconds.

- Shadow Strikes: Five continuous attacks toward enemies within a radius of 6 meters. CD duration is 18 seconds.

- Deadly Sneak: The skill to disappear for a duration (level) and can appear again when attacking enemies, or when hit by an attack. CD duration is 60 seconds.

* Always use the disappearing skill before making an ambush. Choose targets that are weak or being apart from the enemy group, so it will easier for you to escape again. Open the attack with skill 3 with the aim to stun them. Continue with skill 2 to give a lifesteal effect and increase the critical chance of your skills. The final blow is using the fourth skill to ensure the target is killed. (Deadly Sneak > Fatal Raid > Blood Thirsty > Shadow Rush > Shadow Strikes > repeat skills)

"Nobody can live longer than truth, faith, magic and power!"

Mages are not just about dealing with major damage in any clash, but this class also possess some of the most powerful area damaging skills to wipe many enemies in a short time. Very strong against melee classes, as long as you can retain a position to attack from a far distance. Especially with the superior ability such as the Mana Shield which makes them safe enough for early fights. 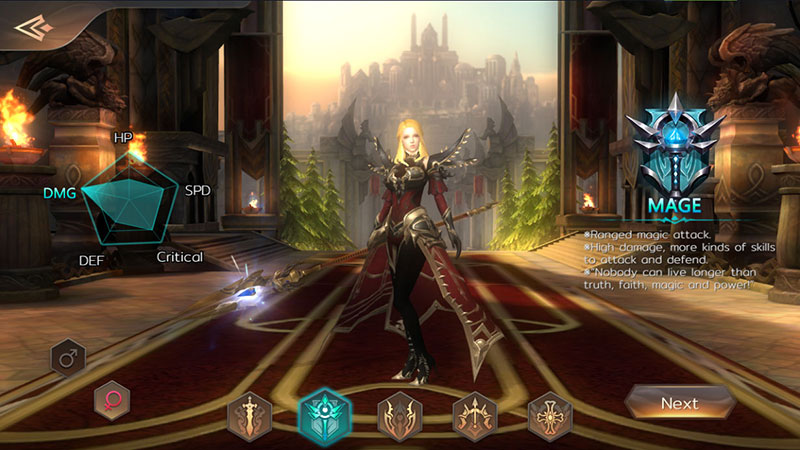 A Mage is indeed required to be able to eliminate enemies quickly because in long-term battles this class will greatly depend on their Mana Pools.

- Hot Sphere: Cast 5 Magic attacks towards one enemy with damage according to level. CD duration is 6 seconds.

- Ember Hit: Launch a stone and fire meteor in a certain area that deals with damage (level) to the surroundings. CD duration is 15 seconds.

* Even though they have several skill areas, a Mage must also be smart when releasing those skills. If not, your skills are wasted and won't make optimal damage to the enemy. Their basic attacks alone are enough to deal with a fair amount of damage, but the ideal combo would be; use skill 3 to give a burn effect to the enemy then follow up with skill 1 which has a fast cooldown. If your opponent is melee class, prepare the Ice Throne when they approach you and freeze them. Keep striking the enemy that slows down while moving away.

If dealing with ranged classes, use the skill area combo (4 + 2) to maximize your damage. The shield skill is very useful to reduce the impact of the enemy's greatest skill attack, so use it before the enemy prepares to use its core skill. (Dawn Flame > Hot Sphere > Ice Throne / Ember Hit > Shield > repeat skills)

"May my light always be with you!"

The only role support in Rise of Nowlin and uniquely specific for the female gender. Even though they are small and petite, Priest holds much greater potential than the other classes. Not just their ability to heal, but when played properly any priest can win in a solo match with each of the classes. 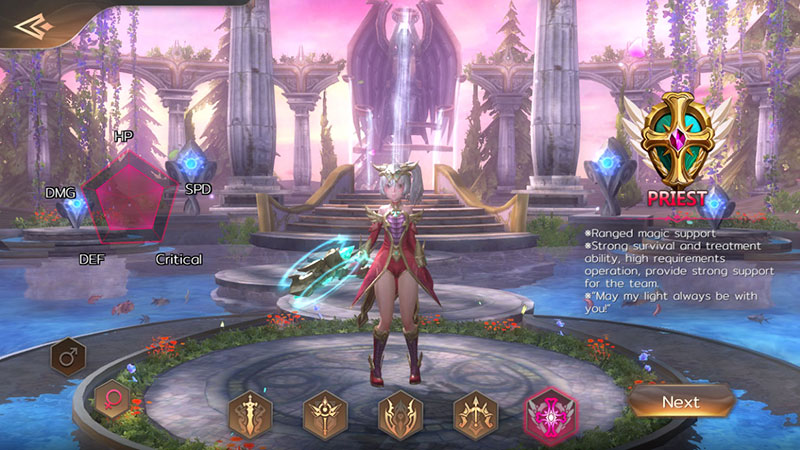 Especially in war events or any massive PVP features, Priest often plays a big role in a team's victory. They can heal all of their teammates while making sure the enemies go down with their magic. Although, you must remember that leveling a Priest might take a little bit effort that the other characters, since their skills are really not meant to kill monsters quickly.

- Mind Trial: A magic attack towards an enemy within a radius of 12 meters from it, and gives a smite effect. CD duration is 6 seconds.

- Fury Storm: Spit energy into the surrounding area with additional damage (level) within a radius of 6 meters. CD duration is 12 seconds.

- Sacred Gospel: Heal area skill that restores HP of teammates within a radius of 12 meters, while increasing their attack and endurance (level). CD duration is 12 seconds.

- Grace: Restore the HP of all team members in the 8-meter area, plus regen (level) effect. 16 seconds duration.

- Discipline Shield: Increases heal power (level), and has the opportunity to give a Fear effect to the enemies that attack you. 25 seconds duration.

* Actually not a hero killer, but in long battles, it's very possible a Priest to win even from a higher level character. Many of the skills play a big role in open warfare with teammates, so try to find loyal partners to always do quests or carry out joint missions. Skill 1 is the best weapon to start an attack, and try to use it on different enemies, don't just spam it for one enemy so the bonus effect would be more optimal.

Always stick to the character who is the strongest or thickest in your group to keep enemies away from you. Use skills 3 and 4 alternately to keep the HP of all team members constantly, always use skill 3 every time the duration of the CD ends. Only use skill 2 if an enemy is approaching. Set your timing for using the Discipline Shield skill when you or a teammate is dying so that your healing skills are greatly increased. (Mind Trial > Sacred Gospel > Grace > (Fury Storm) > Discipline Shield > repeat skills). 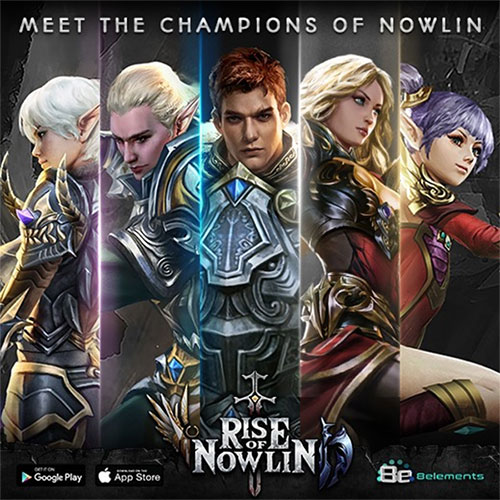 There you go, a brief explanation of the hero classes and their ideal skill combination. Hopefully, this can give a little guidance on how to pick the best character that fits your respective playing style at Rise of Nowlin. Good luck! ^ _ ^

OTHER TIPS AND TRICKS 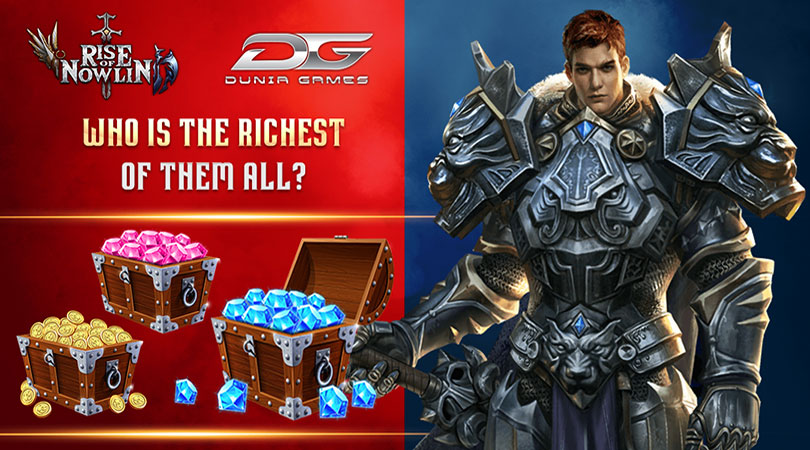 Farming Guide for New Players in Rise of Nowlin! 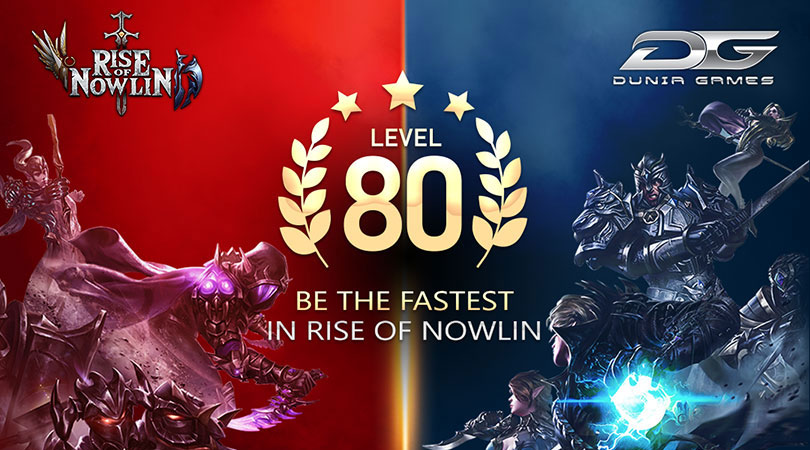 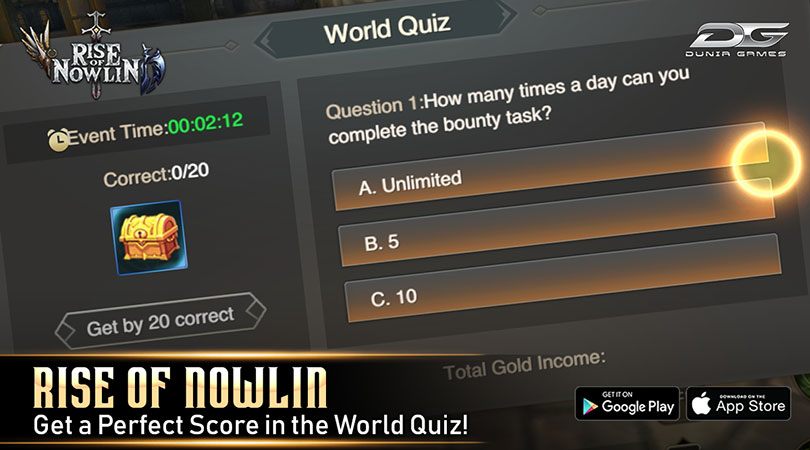 How to Get a Perfect Score in Rise of Nowlin's Quizzes!